Critical signs of radicalisation, according to the government of France are:

2~ Dropping out of school

5~ A sudden change of eating habits

6~ Quitting to listen to music

7~ No longer watching television or going to the cinema

8~ A change of clothing style

They omitted that anyone who is not Charlie Hebdo is a terrorist!

One must love Point 9:

A sign of being a security threat is living and sleeping on the internet!!!!

That point alone will make a good number of French nationals potential terrorists.

As for me, as usual I fail woefully.

I fit 8 out of the 9 crucial signs of French notion of a terrorist!

Of course, my fingers are constantly glued to my cellphone, browsing. Point Nine is, thus, failed.

I did adopt black as my signature clothing. Point Eight failed.

I find television dreary and only utilise it for now for a specific purpose. Point Seven passed temporarily; more than 90% fail in the future.

I did quit listening to music for years. Music, I play again for a specific service. Point Six passed temporarily; 100% fail in the nearest future.

Have I changed my eating habits? No! Not in the last eight years. Okay on Point Five.

But, I can not suddenly start munching baguettes or croissant!

I do want nothing to do with my family and former husband. Point Four failed.

Which sport am I expected to do? Point Three failed.

I do not have friends, according to my enemies among Hausa-Fulanis. Point One failed.

There is profiling for you.

I am curious though whether the French government teamed with elements in Sokoto to devise that nine-point poster of a radical. 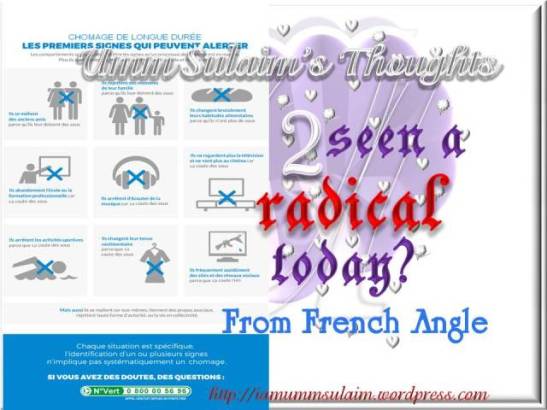